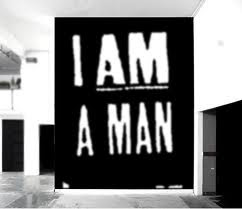 I watched as the stereotypes played across the screen,
These tall muscular bodies prouncing around with their big dicks and fat asses,
And I compared myself to the talking screen comparing my short limbs and small waist to theirs.

I thought the only way I could even image putting my dick in his mouth is if I had a profile that detailed how many times I went to the gym and how big my little head swole,
And I looked at how he could conduct a marriage with a woman, even though a lie, and still make men scream his name,
And I wondered if I could do the same because what was masculine even behind close doors was defined by what others saw in public,
And I was ashamed because I couldn't answer the question without facing my own truth and my self-esteem went from a boil to simple simmer.

I couldn't figure out why I felt this way just by looking at the talking screen,
Because like these women who use their struggles to define their own destinies and their own lives,
I thought I had done the same, but it became evident that my same was way different from theirs,
And I had to reevaluate.

I went weeks questioning my own manhood and questioning what I call discretion,
Neither do I look the part nor do I fit the roles of what manhood had become for a black man within the lines that make borders of what the map labeled America,
I had been taught that what I saw on the screen that was shown in public is what I should strive for,
Studying late nights, earning degrees, bank deposits, lifting 45's while spotted, and the rise in between my legs were all for her and what she will produce,
And I didn't see my world in this way and I became frantic of the idea of what went behind closed doors, although my public scene was still not was expected,
Would allow my social skeleton out of the closet and I held on tight to those closet doors even tighter.

All the while I struggled I continued in my reevaluation,
And I still hold tight, I still hold tight but as those doors that seem so much stronger than me even though I've paid trainers to increase my strength still isn't enough,
I've figured out just enough,
Because although my body doesn't reflect that of the muscle men, 6'0 feet tall with phat asses and long-swinging dicks that speak to the end of rulers,
I am more than what I had questioned, 5'2, 130 pounds is more than attractive to many, dark skin can make another man falter to his knees, and a bright smile and big eyes can make even the tallest and strongest man cum,
So I have no regrets for me because neither does the one who created me,
And I now know that the talking big screen is only a fantasy driven by misconstrued truths that turned into lies years ago and I am an advocate for the truth.