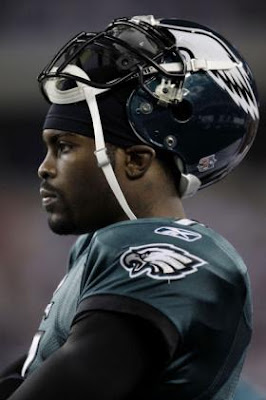 As Black men we are always aware of the fact that the odds are stacked against and those times when we get an even break we still somehow come out with an odd situation. For Michael Vick, not only was he convicted for 'hosting' dog fights, but he was publicly humiliated and made an example out of to other BLACK MEN who enjoy the sport, if you will.

Nevermind, WHITE MEN fight COCKS for sport and kill everything in the sun from bears to deers, it seems that fighting the dogs are a LOT WORSE than going CRUISING, looking for big, muscular deers to shoot and kill or FIGHTING COCKS while they anxiously rub their dicks at each other in such exploits.

My bad--I was on my soapbox, but I'm clean now. No offense to my white readers...I just hate INJUSTICE.

So, now, it seems that my boy is THE quarterback for the high-flying Eagles and has stepped up his game. No, not in comparison to when he first started back after not so sweet dreams of black bars, but even better than when he was with those ATL Falcons, who seem to be doing their thing lately as well.

So, I say to my boy who has triumphed over a lot of bullshit in the past couple years, enjoy the field, enjoy the funds, enjoy football bru, because you have deserved it!
Published by The Discrete Male at 11:30 PM