Shhh! Don't Tell Nobody About My Secret...

I have a secret.

And, I don't want you to tell anyone because of how it looks. I typically don't care about what people think about me, well, for the most part because clearly you can tell I have some issues because the blog is called, '..the discrete male..'.

Well, wait, I have to think about that more in depth now that I've said that, BUT THAT'S ANOTHER POST. Back to my secret.

Ok, I've gotten it out. I said it, and its ok. So, in saying that, ATL premieres next week and the previews came on while I was watching DC and I had the opportunity to see one of the new housewives' husband. And..I..had..to..take..a..breath..when..I..saw..him. 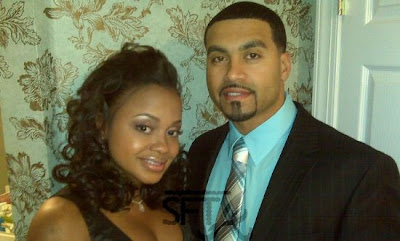 Now, my boy is a convicted felon, which I heard at another time, but I'm not that into it, but it seems that he is clean...dirty, but clean. He stole some cars, traded some vin numbers, little racketeering, nothing major. Spent 5 years in, got big, educated and got married couple of months out of prison.

I guess what everybody's going on about is that she is a prestigious entertainment lawyer who has worked with stars like Bobby Brown.

What I can say, other than the fact that I would invite him into my bedroom on any day, is that if she is in love and so is he, let live what live. People get to involved in titles and what people are "supposed" to be and what is "expected" of them.
And, at the end of the day them same motherfuckas you trying to please because of what is "expected" or what they are "supposed" to be don't pay your fucking bills neither do they employ you to pay them so fuck them.

Ole boy is sexy and whether he did a bid or not, I WOULD FUCK WITH THEM, and I definitely understand why she does--just hoping she's the only he is...LOL...litte unnecessary sidenote.

Oh yea, and you can see the rap sheet below...

Published by The Discrete Male at 10:10 PM