He Liked It So Much He COULDN'T Put a Ring On It? 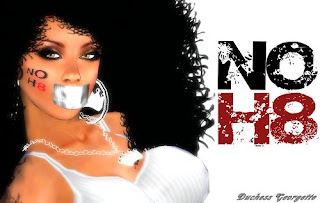 I like to do polls on the site. It gives me the opportunity to see how my readers feel about various issues or ideas that we think about everyday. One of the things, especially as I get older, that I become concerned about is the "long-term commitment" issue.

I think my longest standing relationship was eight months. Don't laugh. I know eight months is not a long time but what I realize is that I tire of people quickly. I'm always looking for the new and exciting. Hell, I don't know how I made it through college because my attention span is as long as a pig's tail.

So, when I think about being with someone long-term is comforting to think about having one person who is in your corner and will have your back no matter what and to raise kids with them and have houses and the like. However, what scares me the most is, what if I wake up one morning to turn to him and I don't want him anymore?

It's neither fair to that person or the kids who will become involved--and I am not one to stay with someone because of time or commitments.

But, whose to say if I did find a little motherfucka who I think is worth the rest of my life we would have the LEGAL opportunity to do so.

In this country we battle so much about same-sex marriage (SSM). It seems to be at the top of political debates with homos across the country contributing negative votes for Obama's presidential approval because they thought that same-sex marriage laws would be past the day after he was elected. One thing people didn't think about is even if he puts in a bill to Congress it still has to be approved by Congress.

And, if we've ever seen the results of a Civil War, except the catastrophe of the 1800's, we are seeing it now when it comes to this issue. I'll be honest. I don't keep up with the latest news about what staunch Republican asshole vents about why he is SO against same sex marriage or the Demo's who air their opinions on CNN about how to regulate the issue. I'm not a news buff; however, what I do know is that in the meantime, a great deal of women and men who I think will be more committed to each other because of the struggles that same sex couples face, will stay together and it's not up to the country to decide what is the "sanctity" of marriage.

I always see tatted across the chests, arms, and backs of dudes and chicks, "only God can judge me." The statement is true. For to long has the country tried to play God, whether it be going into other countries trying to "rally for freedom and political freedom" or deciding what race can marry another.

I think its time we put the issue to rest and legalize the damn thing so that we can move on to more important things.

Because end the end, if I do decide I like it so much I want to put a ring on it, I also want to be able to file my taxes with that motherfucka if it best fits us financially...LOL.

Tell me what you feel.

Oh, quick note, most of you have told me how you feel and these are the results so far...

64% of the readers WOULD marry a guy
14% WOULD depending on the circumstances
14% says they would never because they plan on being with a woman ultimately
7% says they would if the other dude was just banging (shallow...LOL...but def understand)
0% are totally against it

That backs my argument just a little more. If the government were take a poll from the people that it concerns, it seems they would HAVE to legalize same-sex marriages!

Published by The Discrete Male at 4:14 PM