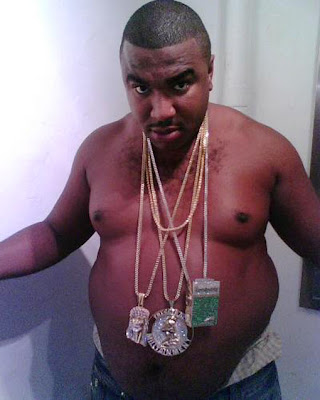 Most of the readers do not know me, but for those that do the one thing that they do know is the line that Youngbloodz spit is my LIFE! And, I'm sitting here laughing as I said that to myself in my brain, but it's to cover the fact that I need to be crying about the damn shit...LOL.

I've always been one to go out and have a couple drinks here and there or get a blunt or two on special occasions...you know, I was DRAKE. (If you don't know what I mean by that go buy the damn album! [Just a little promotion]) Over the past year or so I have become ridiculous with it and this is the shit you do in college as an undergrad, not a grown motherfuckin man! And, the one thing I hate is that I've even gone to PORTS, nigga! Really?! Ports? Blacks is one thing, but PORTS?

Well, of course, I do see the mental changes between when I was a vegetarian and didn't drink nearly at all and rarely saw trees, but where I'm seeing the most change in my body is when I'm in the gym.

I started with my new trainer this past Thursday and not only did he work me out like a slave straight off the ship, but he works me out in a gym that is HOT! Nigga, when I say it's hot, nigga, I mean, it's hotter than outside IN the gym. So, to put my body through such an extreme workout and not having worked out in over a month and then doing it in such high temperatures had your boy fucked up. It wasn't an issue where I couldn't breathe and I was huffing and puffing all over the place, but I could, internally, especially in my lower chest and diaphragm area, feel that I wasn't healthy.

I do not know how to better describe the feeling, but I knew that it was because I had been smoking and drinking so much over the past year. It is an indescribable feeling that you just do not want to have while you're working out. In addition, smoking assists in decreasing appetite and that defeats the purpose of me working out.

So, I have a plan. They say it takes 28 days to break a habit if you do not participate in that habit for those 28 days. HA HA HA! My ass would never make it so instead of projecting lofty goals on myself and then being disappointed when I fail, because there is no feeling like the feeling of disappointing your own self, I am going to pace myself. Sundays, Monday, Wednesdays I will not smoke or drink. (God, I sound like I am at an AA meeting yo, but fuck it, honesty's the best policy and without struggle there is no progress...) And, on Tuesdays and Thursdays (workout days with Trainer) since I would've already worked out I can smoke on those days, but not drink. Then on Fridays and Saturdays I can do what the fuck I want.

I think it sounds like a feasible plan and I hope to stick to it and continue slowly breaking the cycle as I go to where I only smoke and drink on the weekends or special occasions.

So, to the brothers out there, and I know its not just me because I've met some who were WAAAAY worse (and I can only pray for them b/c I know what I'm going through) I think that you should begin to break that cycle so that we live long, healthy lives that are prosperous and allows us to be free thinkers without the cloudiness of extraneous toxins that decrease our life potential.

And, if you have any other, um, addictions, yes, I said it, do the same for whatever it is you are addicted to.

I know most of us have sex addictions. Yes, you, Johnnie, Tony, Lil Boo, Jay, and all y'all who stay on A4A and BGC, and not just for 'entertainment,' take these same steps.

Make a schedule, rid your addiction, become healthier!!!
Published by The Discrete Male at 9:23 PM