There's No Crying on MTV! 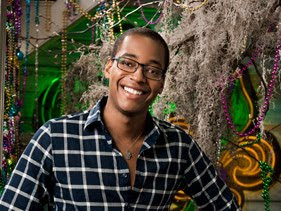 The jocks, the cheerleaders, the nerds, the goths, the weird kids, the cool brus...the list goes on of the cliques that we establish throughout school. And, no matter what most of us say, we were a part of a clique and we bashed the other cliques who were not cool with us....and most importantly, we verbally and physically picked on the groups who were the weaker group. But, what we don't realize is the emotional and mental damage we do to each other as children and young adults.

While watching MTV's Real World the other day, which I haven't seen the first 3 or so episodes, I came into a very important episode because the show focused on the psychological damage that one of the cast members endured while in high school and how those 'high school daze' were brought to the front of his mind because of an event he endured while at the club.

This kid gave up his 'discrete' tag back in high school, which is brave and commendable, but made it harder for him during the last couple years of his high school career. So, he has no reservations about being intimate or physical with potential love interest in public. Well, while partying on Super Bowl Sunday he decided to invite one of his dudes to celebrate and openly kissed him at the bar. Well, a couple minutes later security asks him to leave. His boy meets him outside and informs him that he was only 20 and had snuck in the bar. Security claims that they asked the RealWorlder to leave because he had assisted ole boy to get into the club.

Well, it maybe very true that they did assume he got him in the club. However, if the venue has security, which they do, you cannot enter unless security lets you in. Secondly, there was no evidence that the RealWorlder had met him at a back door and somehow snuck him in. So, what was the real reason they wanted the kid out of the club?

Sounds to me the 20 year old was an excuse to excuse the RealWorlder out because most were uncomfortable with seeing two dudes kiss in the middle of the club. That's my assumption. If I'm an ass because of it, I can guarantee its good ass because I saw the tape.

After coming to the conclusion that this was the case the RealWorlder had flashbacks of when the jocks, and the athletes, and the cool kids and whoever else had berated him because he was openly gay and the tears came. In all honesty I felt for the kid and I admired his bravery.

I hope that as we move forward in this country and other homophobic countries, people can just live and be who they are, whether in public or private. If you don't want to see the two motherfuckas kissing, turn your heads, its all good--let them do them and you do you.

I don't know--what do you think?

Real World: New Orleans | Ep. 4 | Superbrawl 2010: "The animosity between Ryan and Preston escalates to a place that shocks everyone and the roommates fear for McKenzie's safety when she gets black out drunk on Superbowl Sunday."
Published by The Discrete Male at 5:09 PM