The Discrete Relationship 5: It's Complicated... 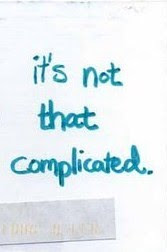 A couple of days before my boy left to be out of the country for a while he put on his facebook page for his relationship status, "its complicated." Well, I think it might be more complicated than I expected. Or, really, in all honesty, its more simplistic than it is complicated and I think that we, moreso I, complicated it. I had made what we have a "relationship" that just had its boundaries and rules since we are not in the same State. I had made our "thing" more than what it was in my brain and I set myself up for failure.

I am a pessimistic person...sorry, but I am. I always expect the worse, MOST OF THE TIME. In this case I was trying to be as optimistic as possible because he is the prototype.

But, when do you know that the person maybe the prototype, but not the real thing? Now, don't get me wrong, I'm not giving up on this already because that would be my typical track record with dudes and I always say that when one person starts to act funny with the other person, that other person needs to do some questioning before they jump to conclusions.

So, me and ole boy have this agreement as I've said before. We can have sex with other people, but we just wouldn't tell each other about our sexual adventures. I made that arrangement just because I'm a jealous type of cat. I don't really give a fuck if u fuck someone or get fucked by someone else, just don't tell me. Leave me oblivious, not because its you having sex, but if I hadn't had sex then I'll be pissed just because you got your nutt and I didn't. So, we agreed--all hands down.

So, the other night I decided to take a peek at his XTUBE page. There was already a vid posted from way before we even met each other, so I knew about that, but then I noticed that there was two vids. I thought, maybe, I typed in the wrong user. Checked the name, clicked on the profile, ok, its the right dude. So, I click on the vid--its a dark vid of him with someone else. Not long at all, no details, no face, barely stomachs or anything show but dick and asshole. However, the point is...

If we made that agreement and you POST a MOTHERFUCKIN VIDEO and post it on XTUBE, whether you had told me or not, do you think that I would never go back to your XTUBE page again? Now, I'm not mad about him being with someone else, not at all, but for you to post it and to think or not care if I saw it says a lot. And, ultimately, I can only blame him for 50% of that. I cannot satisfy his needs and I know that being away. That's the reason why I made the agreement...I mean, I think I would be the fucking perfect dude to be with because I don't get all into the 'cheating' thing and get all bent out of shape and act crazy about my dude being with someone else. I will do an internal investigation about what I'm doing before I confront you about what you're doing because sometimes people are REacting to what you've done. I've done that in this situation.

And, I've come to the realization that maybe this won't work because I can't be the one to make the vids with him. Maybe we moved too fast and we talked a good game but cannot uphold the rules of that game. Maybe it's not our time. Whatever it is, and I don't know what it is, we gotta hash it out. I was disappointed about the situation when I found out, a whole four weeks after the vid post...LOL...but its all good man.

I do not know what will happen with the situation, but what I will say is that you live and you learn yo. You learn what you CAN deal with and what you CANNOT. The question is...CAN I or CAN I NOT?
Published by The Discrete Male at 11:21 PM