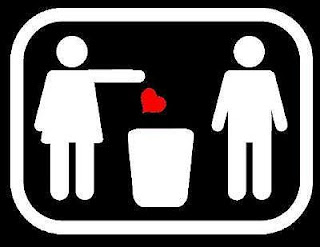 I refer to all of the people that I've ever been involved with ex's. However, I actually do have ex's where we were in a real, committed relationships. Now, I have problems functioning in relationships and you can probably tell that from earlier posts. My philosophy is if you fuck up in the beginning you will continue to fuck up as the relationship continues and I simply cut you off. I'm not saying it's right, I'm just saying that's the way I've always been.

I have this ex and he fucked up, well, I thought he fucked up and really, in all honesty, he didn't fuck up as bad as I thought he did. The story (in short): We talked for about a 6 or 7 weeks because we were in two different cities--he was in my hometown and I was in ATL. Well, I moved back home and when I did we kicked it and we decided that we would just do the damn thing. Well, about four months into the relationship he got arrested and that was the worst thing that could've happened. I was his second call. And when his name came up it was not the name that I understood his name to be. Strike 1 (major major strike). Then, when I called his homeboy about getting the funds up to get him out he was calling him a different name and I thought that maybe I had the wrong friend. Well, no, it wasn't. Strike 2--because now I'm to understand you have three different names.

While talking to his friend I came to understand that he had been arrested several times for several different reasons and this is an on-going thing. Strike 3. At this point I was over it. I had been lied to about his entire identity. So, I gave his friend the information he needed, talked to his parents about getting him out and asked what they needed--did what I could to ensure that his people got him out and I said, fuck him.

Well, he did get out four days later on bond and I was the first one he called. Now, when I am really into you and do some shit that makes me question your character or your honesty or your integrity I go through a systematic psychological process to detach myself from you. One of the ways I do that is by exaggerating every flaw you have and use that as a means to say that you are not the one I should be fucking with. And for all intents and purposes of this situation I did that.

Now, I did go pick him up but by this time, yes, after four days I was done. I didn't want to hear excuses neither did I want to hear explanations because the first thing he did when I came to pick him up was look guilty. So, we get in the car and he starts to talk and all I say is, "yo, you don't have to do this, bru, we good..." He looked shocked but I knew he was thinking, oh ok, so you understand but he didn't get exactly what I was saying. I never gave him the chance to explain and after I took him home I didn't answer his calls for a few days.

After two or three days I just decided to hear him out. Well, come to find out his name is his name. He never told his friends his middle name and that's the name he gave me but never told me that it was his middle name, even though we've had discussions about how we got our names. So, ok, I can see that, maybe, not too too big of a deal. But he did say that he had some charges and his license had been suspended for sometime and his insurance was cancelled (and I always wondered why when I made him drive he would get some type of way).

Essentially, he never trusted that I would see him as a MAN because he had so many issues going on in his life. Now, I am not the typical type of cat. I'm not the dude with an A4A or BGC profile that has this laundry list of qualifications for you to fuck with me. I fully understand what struggle is. You don't have a car, fuck it, I like you, I'll drive. You live with Mom dukes or staying with a family member, fuck it, we'll get a room or you can come to my crib if my living situation is conducive to that. You got four kids and trying to make child support, fuck it, support them kids, I may can get your dinner and beers here and there. But just be honest about it. And we put up walls. I am the owner of Emotional Constructions, Inc. because I can build a wall in less than 20 seconds of meeting a motherfucka so that's understandable. But don't lie about the stupid shit that doesn't matter. I have to be able to accept you for you and you cannot put up a front with me because then I'll feel like you made the choice for me if I want to fuck with you or not.

Well, anyway, as of late he's been calling a lot. And I know that he's been calling because he just wants someone to chill with and talk to and that's cool. I can be accepting of that but the attraction is no longer there. He's a good dude, he is, he loves his kid, he tries his best to put forth the effort to reach his goals (within the power that he has to do so) and he takes care of his mom and grandmom in a manner that is really commendable. I just don't think, at least in the present sense, that we could be together. That psychological process I referred to earlier is the thing that keeps me from fucking with ex's. I look at them and those same flaws that I magnified in my inner thoughts come back to life.

And, on top of that, there's the cat I'm somewhat fucking with now so how do you deal with that. How do you deal with an ex who you know needs companionship and friendship but they can't deal with the platonic nature of a relationship that you're offering. Do you keep answering the phone inspite of or do you just say don't call me back?

Let me know what you think fellas?
Published by The Discrete Male at 12:05 AM