Can I "Follow The Leader" who got "Paid in Full" since I was only 4 letting the "Rhythm Hit 'Em" while they "Sweat His Technique" because he's the "Master" that wrote "The Book of Life" creating the "Seventh Seal" representing the way he completed himself through this musical style I love so much called Hip-Hop?

In the words of President Obama, yes, we can. Take a trip down memory lane and get with one of the greatest rappers of all time, Rakim. I remember when my big brother would blast Eric B. and Rakim in the house when my mom's wasn't home. We would jam to the incredible wild lyrical styles of this black adonis on a microphone and little did I know I would have a secret love affair, not only with his music, but with him. Rakim is not only charasmatic as a rapper, but also as a man who is dedicated to improving the lives of his community. And he has a mean swag that utters just a hint of sensitivity that accompanies that fantasy of tall, dark, and handsome.

My boy has accomplished much in his 24 year tenure as a Hip-Hop mogul and I don't think he gets the props he should as both a lyricist and a community activist so I give tribute to him as he is THE MOTHERFUCKA OF THE WEEK! 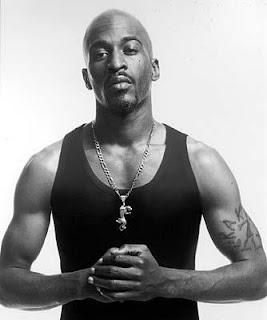 Published by The Discrete Male at 1:30 AM