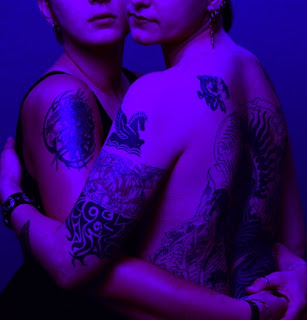 A while back there was this show that caught my eye, never watched it but thought that it would be an interesting series of sorts, especially because it dawned the name of our favorite blaxploitation vixen, Pam Grier.

I like to see myself in the television shows and movies I choose to watch. Of course, my assumption was that it would be about a bunch of women who were chasing pussy while looking for love.

Well, I was right about that part as it seems because I just got through watching the previews for "The Real 'L' Word" which is a new series slated to premiere on Showtime during its next season of premieres. Now, while watching I understand that this reality series is the catalyst for the creation of the now defunct show. Every character was loosely based upon each one of these ladies. While watching their various testimonies, life stories and what motivates their need for relationships I came to the conclusion that we're not much different from them.

One of the ladies explicitly said, "...I am a woman looking for love but always end up in heavy lust." The reality of the situation is we are much like that--the discrete male that is. No, I don't think I'll ever admit that I am in search for love--that's to be left to the corny motherfuckas...LOL. I would say I am looking for compatibility and hopefully that compatibility will bring love. Actually, that sounds a little corny too but at the least, its not saying that I'm looking for a utopian ideal.

The issue here is, if we're seeking one person, which ultimately makes it a little easier to live discreetly, then why do we get hung up in heavy lust. I would've thought, to make a comparison, that lesbians had it easier. Two women, highly emotional creatures and who are told the fairy tales of finding the "one", would be able to make it work. The lesson I learned today is, we're all fucked...LOL.

The journey of finding a monogamous relationship, whatever your definition of that is, is hard for everyone. And it is even more difficult when you have to share your relationship behind closed doors.

For us, especially black men who are built to be ubermasculine, thugged, domineering, etc. we think that lust should be the ruling factor when we deal with other men, well, when we deal with any sex. But even those of us who were built like this we still have the desire for one love. I've had my share of experiences dealing with various types of cats and in our conversations I know that this is true. In fact, in dealing with these cats I've even had to tell my homies that some men, who have the exterior facade, are worse than bitches.

When I first meet a dude they act as if sex is the main goal, let's fuck to fuck, and get at me later. Two weeks later, I'm getting questioned and told: 1. Where were you when I called? 2. Who you with? 3. I just wanna make sure you like me, that we're good? 4. You're my type of dude, I don't think I wanna fuck with anyone else. And, I do mean, two weeks later.

We, as black men, yearn for love. And as much as many of us hate to admit it, it's the truth. I'm not saying put your all into motherfucka you meet, but explore giving up heavy lust and concentrate on dealing with one cat at a time. See how it works...if it doesn't, the only thing you can do is fix it. Personally, that is.
Published by The Discrete Male at 11:00 PM