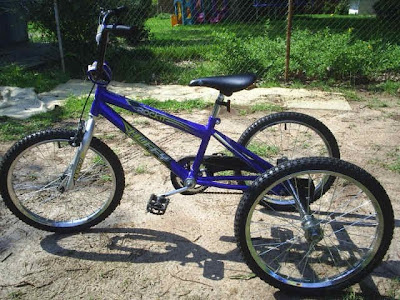 When we were growing up our parents dreamed of the day that we would advance from our three wheel tricycles to a two wheel big boy bike. We somehow learned, through our childhood transportation, that two wheels are better than three.

But, are we as gay and bisexual men, relearning the value of that third wheel?

My first thought would be disappointing because I value two wheels. Two wheels are stable, the ride may get a little rocky every now and again, you may get a little off path because of the steering, but ultimately, it works and it gets you from Point A to Point B.

But, he tells you that its ok, his boyfriend has a boyfriend, and he's looking for one too. You look confused, befuddled...you become a little out of sorts. You don't understand because for a looong time, throughout your adolescence and adulthood you were taught two is better than three when it comes to relationships. And, hell, four is definitely not an option.

This actually happened to my homeboy and he was confused. Does he continue to look for the perfect bike or take the tricycle being offered to him on a silver platter?

The question he proposed to me was, "...is this the evolution of the 21st relationship?" Are we more accepting of having OPEN RELATIONSHIPS because we want them to be open or to hold on to what we already have? Because, ultimately, the third wheel can always be SCREWED off.

In my personal opinion, I think that someone will be SCREWED in the end. If you meet someone whose been an in a relationship for four years they have a solid foundation. The two wheels have worked when the third was on and when the third was off. But, it cannot work when one of the two main wheels are not in position.

So, I say, if you're not a main wheel, you need to find another bike. Too often we get comfortable with allowing ourselves to be bamboozled into the idea that to be with someone we have to succumb to their idea of what a relationship is when really you can find someone who shares the same ideals that you have about relationships, which leaves room for compatibility. And, no, its not always easy trying to ride a two-wheel bike, when you start you fall off sometimes, you may cheat, you may flirt, what have you, but you get back on and try again.

Now, I'm not so narrow minded as to think that a relationship between three people can't work. But, it only works when all parties involved are the same sized wheel. It cannot be a standard bike with extra wheels just holding on, everyone has to be valued.

What do you think? Why are we accepting the three partner relationships and is it healthy? Is it satisfying? Is it the new face of gay and bisexual relationships for the 21st century? Or, even, from what we see from Jada and Will Smith's relationship, is it the better way to go?

Look forward to your comments...
Published by The Discrete Male at 12:57 AM