The Big Question...That Seems to Get Bigger with Time! 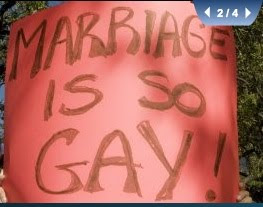 "How are you going to get married when you're not dating anyone?...and I want some GRANDKIDS!"

It is sickening and I am so over the q and a about my life with my parents. My sister got married at 24, had a baby at 26, my brother vows never to get married, but had his first at 23, my half sister got married at 20 and started before she said 'I Do', my half brother has about 2, and my oldest half brother got married at 19 and had his first before he said 'I Do' so I guess my parents are used to their children having accomplished either or before 30. Well, I'm 2 years from 30 so the question is being, not only asked, but asked too much for me, at least.

The amazing thing is they just started asking, maybe, when I was 27. All before it was "not too early because you need to get your degrees," or "please be finish with school before you get married, your brothers and sisters all messed that up," or "how are you going to support a kid at your age." Now, I can't get the motherfuckas off my back about it.

And, I think that we all deal with those questions as time passes from our parents and we get older. I know my neighbor, a woman, was asked that a lot by her parents, but her choice is not to have kids. She is cool with it and to be honest, I want one kid, but I don't want a whole bunch of motherfuckas depending on me to feed 'em and shit. I'm not that guy.

I don't even much like being with the person I'm fucking with for more than a couple of hours. So, even if I was to decide to be with someone, even if it was a guy, it would be difficult for me and if it were a chick, I would go fucking crazy because they like to be in your face 24/7.

So, how do you balance if your own selfishness and the ability to feel comfortable with wanting "me time" with being in any kind of relationship and/or having a kid?

That is the question I ask myself when they ask me that and I just don't know the answer and I'm really not willing to put much thought into it because when the answer comes, it comes.

You tell me. How do you balance all of it?
Published by The Discrete Male at 10:22 PM