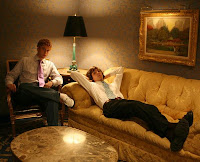 Star Trek is one of the best labels in the history of Hip-Hop, and arguably so, but I think that they've bought an element to Hip-Hop that wasn't appreciated until they bought it back to the table. Now, Afrika Bambaataa started a variance in instrumentation to Hip-Hop by using his beat machine in a way that most producers wouldn't have thought of. For most producers they thought using hard bass drum lines and low-pitch sounds in their music would satisfy the general audience of Hip-Hop more than higher pitched tones, but what they didn't realize that Afrika Bambaataa and producers who followed in his footsteps is that opposites attract. The hard voice of rappers against higher pitched tones are genius, to me anyway.

So, I ran into these cats a while back and saw that they were co-signed by Pharrell, Chad and Shay so I thought I would give them a chance. Pharell and his boys had taken these British white boys, Chester Fr 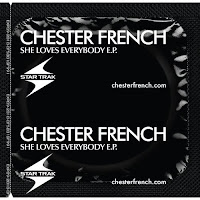 ench, who appreciates various types of instrumentation and fused the rythm and blues of Hip-Hop into their material. Now, Chester French are some bad motherfuckas. If you get a hold to their first single, "She Loves Everybody," I think you'll dig them too. So, I'm always on a hunt for new music and came across this single they released partnering with Talib Kweli, one of my favorite rappers, and Bun-B.

And it's genius, man. Listen and learn how we history repeats itself, even the stylistics of Rap music.

P.S.-This needs to be my anthem cuz I'm so tall, inspite of the fact, I'm so short. It's about attitude, man. Not height. Remember that!

She Loves Everybody
Published by The Discrete Male at 12:08 PM