You Don't Have to Ask Because I'm Telling!!! 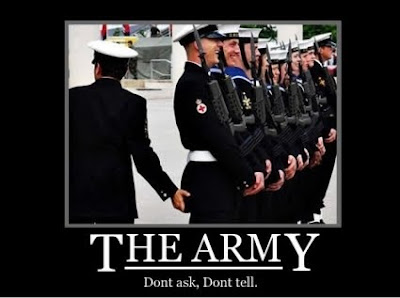 For all of American history one would never think that someone who is out and gay could be a soldier in the military. Mostly white guys with sprinkles of white women and even fewer black men and women picketed, wrote letters, created blogs, became a part of the representatives or became a senator, to make this change.

The first step was the policy that was passed called, "don't ask, don't tell," which meant you can serve even if you're gay as long as you don't tell anyone that you are gay. Now, I've met plenty of dudes in the military (well, let me not say it like that, I may seem like a hoe) who are gay or bisexual, and I'm sure they would never tell, but I know that our military wouldn't have as many soldiers if as it did if they REALLY found out how many dudes are fucking each other and how many girls are licking pussy under the barrack sheets.

But, finally, now, they have passed the ban on "don't ask, don't tell" giving every little gay boy and girl his or her dream "to serve his or her country" like every other straight kid across the Nation.

So, congratulations, but I warn you, if you tell just beware when they ask you to be on the front line on the battle shores of another country. LOL...remember Chef in "South Park: The Movie?"

I'm just kidding...go serve and die for your red, white, and blue...everybody included!!!
Published by The Discrete Male at 6:25 PM